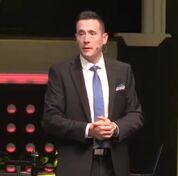 Andy is a passionate communicator of God's word. He takes the responsibility of "rightly dividing the word of God" seriously. However, he understands the simple truth that people don't care how much you know, until they know how much you care. He takes time to know and love the people in the community and is always available to talk with a person that has a need.

He was born in Indiana where he was raised and eventually obtained His Bachelor's degree in Criminal Justice. Although his plan was to continue on to law school, God's plan was different. Surrendering to God's plan for pastoral ministry, Andy started seminary at Liberty Baptist Theological Seminary in 2002. After a student ministry at Maranatha Baptist Church in Farmville, Virginia, Andy was called to pastor Daleville Baptist church in 2004. He served there as the Senior Pastor for 10 Years. Then in 2014 God led him to Onancock Baptist Church.

Andy married his wife Elizabeth in 2003, and they have been blessed with three children: Sarah, Abigail, and Drew. 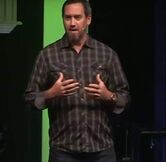 Russell has a deep passion for music and people.  However, it is his desire for others to love music too. He leads energetic worship with a desire to lead others to be engaged in worship.

Russell married the love of his life in 2001.  He and April have one son, Jadon, who unbelievably has more energy than his father!  Russell is a lifelong St. Louis Cardinals fan as well as a Rams fan, which should not be held against him.
Elders